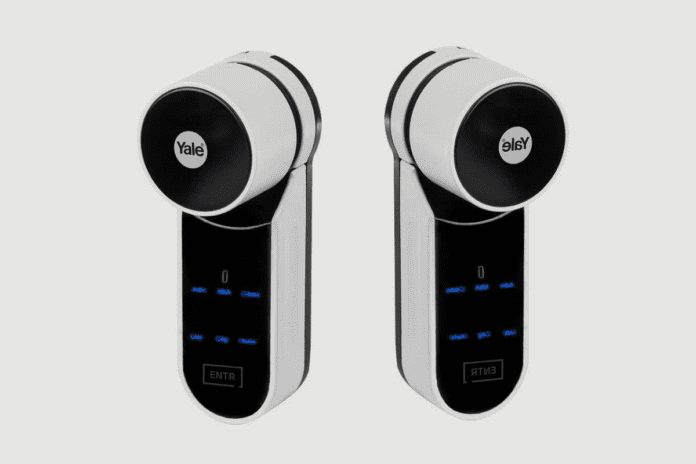 Yale is one of the major pioneers of smart locks which are easy to install and safe to use. The Yale ENTR starter kit smart door lock is a convenient and secure lock that gives you the keyless advantage of locking your door. Either to your home, office or school. It is a flexible smart lock that is built to replace your existing traditional locks.

It provides you with a variety of ways to unlock your doors such as the fingerprint reader, the mobile app, remote control or pin code and it also has an automatic lock feature which means your door is always locked when you close it.

All you need to do is select the option that best suits your needs. You can also use the app to send codes to your friends or a third party when you need them to access your home.

It is an advanced smart lock that integrates with Yale’s smart alarm which is automatically disarmed when you unlock your door with the Yale mobile app. It allows you to have full control of your door lock from anywhere on your smartphone and any other Bluetooth enabled device. 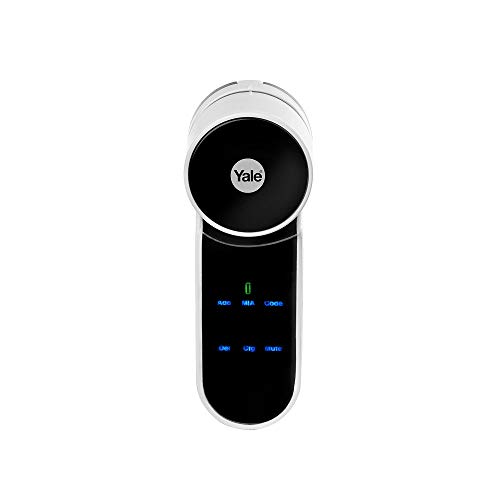 The Yale ENTR starter kit smart door lock has a simple design that hangs nicely on your door. It is a smart device that can be unlocked through different means such as remote access, key code, touchscreen keypad, voice control using Google Assistant or Alexa.

It has small buttons that are shown when you press three fingers on the screen panel for a few seconds. These touch buttons can be used to control the lock during installation. You will not find any manual key slot in this smart lock because it uses a PIN code instead. This makes it more difficult for intruders to get into your house. The PIN code is set by default but you can change it if needed.

The Yale ENTR smart lock transforms your traditional door into a smart door and offers you different options for unlocking your door including Bluetooth (Bluetooth Low Energy) which is enabled by a smartphone, a fingerprint reader, remote control, the smart lock touchpad using number combinations and a traditional key if you prefer it.

It also has an auto-lock feature that automatically locks your door a few seconds after you shut it. You can also confirm on your smartphone anywhere at any time if your door is locked. It ships with IP44 temperature protection which is quite reliable and accommodates up to 20 programmable user entries for authorization of scheduled access.

The Yale ENTR smart lock comes with a 7.4V and 2600mAh lithium-ion battery which is highly durable and reliable for all smart lock operations. Once the battery inside the lock runs low, it can be recharged with the use of a charging cable.

Inside the pack of the smart lock, you will find an ENTR® Smart Lock with Cylinder, 2 Keys, Screw and Magnet, remote control, charger, a straightforward manual with illustrations and instructions on how to operate the ENTR accessories such as the remote control.

How much is Yale ENTR Smart Door Lock?

The Yale ENTR smart lock is sold for £219.99. This is the price you get to pay if you want to add a smart lock to your home security system. You can get your smart locks on online retail stores like Amazon.

Is the Yale ENTR Smart Door Lock worth buying?

The Yale ENTR smart lock makes our life simpler. It gives you access and control over your door lock on your smartphone and any other Bluetooth enabled devices. With the Yale ENTR Assa Abloy smart app, virtual keys can be generated and sent to friends and family members through email or other messaging apps.

This gives you complete control of the people who have access to your home. You no longer have to worry about losing your keys or throwing down everything in your bag just to get your keys. All you need is your remote control, fingerprint or a virtual key for third parties.

The Yale ENTR smart lock is a nice and well-designed lock that is easy to install and does not require any additional drilling on your door. It is a great smart lock that gives you different options for unlocking your door.

Q: How do I know if my door lock is compatible with Yale ENTR?

Q: What are the advantages of using Yale ENTR over other smart locks?

A: Yale ENTR is a wireless smart lock that can be controlled via a smartphone app. It does not require additional holes to be drilled in your door. It is also battery operated so there is no need to worry about power outages.

Q: Can I use Yale ENTR with a deadbolt?

A: Yes, you can use Yale ENTR with standard deadbolts as well.

A: No, Yale ENTR does not support voice commands.

Q: Is the ENTR smart lock easy to operate?

Q: Can the auto-locking feature on the Yale ENTR be deactivated?

Yale is one of the major pioneers of smart locks which are easy to install and safe to use. The Yale ENTR starter kit smart door lock is a convenient and secure lock that gives you the keyless advantage of locking your door. Either...Yale ENTR Starter Kit Smart Door Lock Review: Discover the Pros and Cons