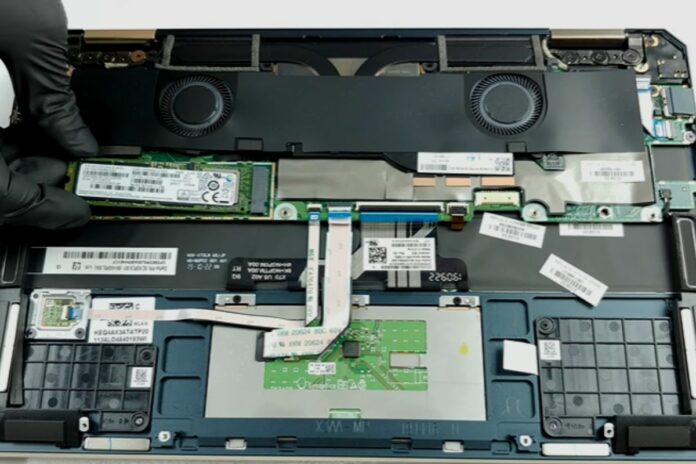 Upgrading the RAM on your HP Spectre X360 is a good idea, especially when you want to do a lot more with your laptop. It is also an excellent way to save money on a laptop when you know that the RAM is upgradeable because an 8GB laptop that can be upgraded is always cheaper than getting a 16 or 32GB laptop.

Most HP Spectre systems come with about 8–16 GB of RAM, which should be more than enough for you to handle most tasks on your system.

However, if you need more RAM to be able to get more things done, then you should try and increase the amount of RAM available on your system. So, in this article, I will be going over the easiest way to upgrade your RAM on your HP Spectre X360, as well as giving you some of the benefits of upgrading your RAM.

How to Upgrade Your RAM on the HP Spectre X360

Upgrading the RAM on your HP Spectre X360 15 is a very simple process. The first thing you will have to do is take off the two rubber strips at the bottom of the laptop and then proceed to use your Philips head screwdriver to remove the seven screws underneath the rubber strip. However, there is one Torx 5 screw which you would need a Torx 8H or Torx 5H screwdriver to remove. Once that is done, you can proceed to lift the cover of your HP Spectre X360 by carefully prying it from the clips holding it together.

Once that is done, you should be able to see the entire internals of your laptop. After that, you will need to take your Philips head screwdriver and remove all the screws that are connected to the battery. So, you can take out the battery by pulling it straight out. After that, you should try to press the power button a few times so that you can discharge the capacitors.

Then you will need to remove the thermal transfer shield for the RAM modules by simply pulling it up, which should make it come off very easily. Once that is done, you should see your RAM sticks in a dual-channel setup. So, depending on the amount of RAM you have, you should either see two 8GB sticks of RAM for 16GB or two 4GB sticks of RAM for 8GB.

The next thing to do is slide the two clips holding the RAM out, and the stick of RAM should pop out on its own. Then you want to carefully slide your RAM out of the chamber and set it aside somewhere safe. Then, you can do the same for the other RAM on your laptop. A quick note; please do not hold the RAM carelessly or touch the RAM or its golden contacts, as that could damage the RAM. Please make sure to hold the RAM at the edge.

Finally, you just need to pick up the new RAM and then proceed to slide it into the chamber and then gently press it down until it clicks. Then you can do the same for the other RAM that you have. Some laptops come with a single channel of RAM, so make sure you know how many channels of RAM you have on your computer so that you don’t have to buy extra. After you have installed your new RAM, all you have to do is screw everything back together with your Philips head screwdriver and Torx screwdriver.

What are the Benefits of Upgrading Your RAM?

If you know that you can upgrade the RAM on a PC you buy, you can save yourself some money by buying one that has less memory and upgrading it later for a cheaper price. This is very vital if you are on a budget and can’t get exactly what you need. Getting a cheaper model and upgrading later will always save you some money.

Multitasking and RAM go hand in hand. So, the more memory you have, the more programmes you can run simultaneously. Laptops will experience significant lag when running a lot of programmes at once if you don’t upgrade the RAM. When you are using programmes like Word, emulators, and browsers like Chrome, the microprocessor extracts the executable files from the hard drive and loads them into the RAM.

Even when running multiple programmes, the startup may be delayed if your laptop doesn’t have enough space to do it. You’ll notice that your capacity is insufficient, especially when you’re working on demanding tasks like video editing. When you upgrade the RAM on your laptop, your startup and shutdown times significantly improve.

When a laptop has more than 4GB of RAM, you can stream all of your favourite videos without being interrupted. However, the improvements are not limited to just watching videos; internet surfing becomes significantly quicker irrespective of your connection speeds. Web pages will open quicker, and it will make web content open quicker.

This is because the computer has to transfer data to the hard drive when there is insufficient space in the RAM. Once an upgrade has been made, you will notice the improved movement of data as well as increased sharing speed.

The computer’s overall performance will probably suffer if you run several resource-demanding programmes at once; it’s even possible that the computer will begin to slow down. The issue can be resolved by adding more RAM. The best course of action in this situation is to add more RAM.

If your PC is primarily used for PC games and graphics applications, you should have at least 16 GB of RAM to enhance the user experience if your gaming PC meets these RAM requirements. Then, using programs that require those resources won’t be a problem for you, allowing you to play uninterrupted and boosting your chances of winning. Games function more smoothly when response times are faster.

Depending on its processing power, the operating system makes only some of the GUI features available. The more RAM a computer has, the more graphics-intensive features it can use.

The operating system reduces user interface resources like animations and shadows when memory is low.

Are you aware? More RAM can be installed to increase disc and device data transfer rates significantly. The process of downloading or uploading files and data over the Internet will noticeably improve, but how?

Data is first copied to RAM and then pasted to the new location when you move it from one area of the hard drive to another.

More space is available to paste data when RAM capacity is increased. Therefore, this stage moves along much more quickly with larger amounts of RAM. The same applies to downloading and uploading.

If you were able to do it, let me know how it worked out for you and what kinds of improvements you were able to notice. If you have any more questions, please leave them in the comments section. Thanks for reading.

My Acer Aspire 5 Won’t Turn On Or Charge

How to Add Ram to an Acer Aspire 5 Laptop

Is Acer Aspire 5 Good For Gaming?